Turcan and Raizner with State Secretary Schopper in Poland

Home Turcan and Raizner with State Secretary Schopper in Poland 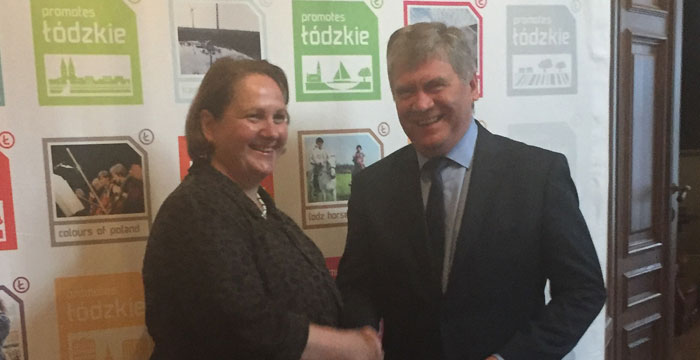 From 3rd to 5th of May 2017, was organised a Delegation trip by Mrs. Theresa Schopper, the State Secretary of the State Ministry of Baden-Württemberg to the City of Łódź, Poland. The mission of the delegation was to establish a strong link between the two regions in different sectors: academic, business and administrative for future technology transfer and collaboration. Steinbeis Danube Center attended the delegation as representatives of the business sector of the Baden-Württemberg land. Interesting projects were discussed with the Lodz Regional Development Agency, the Regional Policy department and the Entrepreneurship Department of the Marschal’s office of Lodz. During the event, we were able to visit the Special Economic Zone (SEZ) of the city of Lodz, which is an area designated by the Polish Government, where business activity can be conducted on preferential terms. Many international companies are the beneficiaries of the SEZ of the city of Lodz. Best practice example was presented by the well known-company “Häring” is one of the leading manufacturers of precision components and subassemblies for the automotive industry. They have more than 2000 employees in the SEZ Lodz. Steinbeis Danube Center plans a series of activities between the two regions, in order to support the revitalization of the historic industrial areas of the city of Lodz together with the State Ministry of Baden-Württemberg.